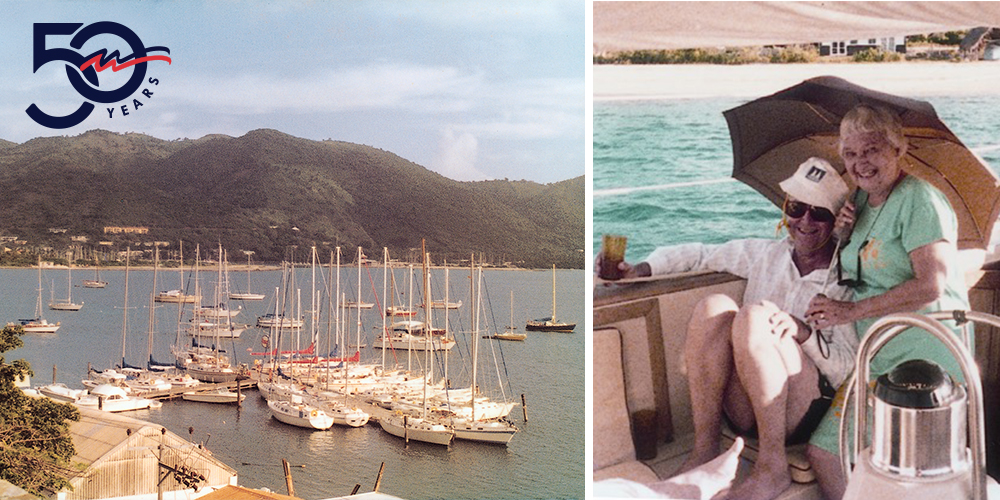 In celebration of 50 years, we thought we would sit down with The Moorings Yacht Sales Manager, Jean Larroux, and take a trip down memory lane. Jean wrote the rules for the charter yacht ownership program used today—in fact he invented it. That’s right, our sales manager wrote the blue print for what 100's of other yacht charter companies would imitate for decades to come. This is his story....

How it all started

I was hired by Charlie & Ginny Cary and their stateside partner, Tony Rainold, in 1976 when the Moorings was expanding in the Caribbean. The story of the start of The Moorings in 1969 with six Pearson 35’s purchased by Charlie & Ginny and Tony & Sheryl Rainold has been printed often. But what many people don’t know is that the idea of the Moorings began long before this. Charlie was an engineer with Freeport McMoran Oil and Gas division based in New Orleans. Tony Rainold was with the company too. The company wanted to relocate Charlie to New York.  He agreed to go check it out but as it turned out, Charlie and Ginny were not cut out for the big apple.

The first sail and the rest is history

The couple decided to take some time off to see if they wanted to continue with the oil and gas exploration.  Charlie had a friend that offered his yacht in the Virgin Islands to give him time to reflect. Charlie and Ginny took him up on that offer and went for a cruise. During that cruise the idea was hatched for The Moorings.  Charlie, Tony and silent partner/attorney Bob Polchow organized The Moorings and launched in 1969. The initial fleet was the six Pearsons 35’s and a conglomerate of private yachts managed by The Moorings.

Charlie and Ginny moved to Tortola, and Tony became the head of sales and marketing and opened the reservations office based in New Orleans.

To grow the company it became apparent that there had to be a creative new way to populate the fleet with new yachts. Charlie and Tony collaborated with Charlie Morgan, head of Morgan Yachts, to design and build the “perfect charter yacht”. Typical mono-hull designs of the time were relatively narrow beam with a cozy V berth forward, and maybe a pilot berth aft or a convertible settee to a sleeping area.  Those are very close quarters, especially if non-related friends were to share this sailing experience for a week or more.

The Morgan Out Island 41 was born. A beamy center cockpit yacht with a full size double berth aft with a head and comfortable berth in the fore-peak separated by the engine compartment and a “crawl space” connecting.  The yacht had a full keel, and except for the most accomplished sail trimmer, people sailing the yacht inevitably had to ware ship to come about, but the charterers loved it. Soon added to the Out Island series was a OI 33, 36 and 51.

I joined the company to focus on the advertising, marketing and selling of the yachts to “investors”.  At first the programs mirrored a program that Bob Polchow and Charlie conceived for a condominium development on the North Shore of Lake Pontchartrain near New Orleans. Initially the programs were variable and had some tax benefits to the concept.  Sales were modest initially because the idea of buying a yacht and having it based in a place most persons had only read about was a tough sell.  The tax incentives at the time were centered on those available to investors in real property. The IRS had not fully focused on the similar but still almost unknown concept of yacht ownership.

With the growth of the business came the realization that the original location of the Tortola base,which was at Ft. Burt in the northwest corner of Road Town, would not sustain the activity the partners envisioned.  The BVI was developing some water front areas, Wickham Cay I and Wickham Cay II. Charlie was able to convince the government that they should entrust the long-term development to Wickham Cay II and with it jobs and tourism for the BVI.  On my first visit to the BVI, The Moorings at Whickam Cay II was underway. At the time there were few automobiles and paved roads were limited mostly to Road Town. Chickens and Goats were almost as welcomed as customers in the Barclays Bank and one of the favorite modes of transport was the donkey.

I would travel to the BVI in January and stay until May or June. I would in effect have a non-stop six-month boat show with a yacht on the quay in front of the Mariner Inn restaurant. I lived on the yacht, swapped it out when it was scheduled for charter and made presentations on the ownership program to charterers and prospective buyers.

Thursday was typically the slow day at The Moorings, so Ginny Cary and I would take a ferry from Road Town to Anegada when we had the chance. We’d pack a lunch and walk over from the dock at Anegada Reef Hotel to Loblolly Bay. Ginny would read a book and I’d harvest conch that we’d take back to The Mariner Inn Restaurant. The conch was cleaned and prepared for conch roti and conch fritters, and served at the restaurant.

Although The Moorings is now a global company offering many destination choices for yachtsmen, the flagship location in the BVI has been and will always be The Moorings.

She was devastated in Hurricane IRMA and the rebuilding continues. Many of the owners that lost yachts bought new boats and are back enjoying the program and its worldwide benefits.  Some of these owners are on their 7th boat with us.  At the Annapolis Boat Show 2018 I ran into one of our owners at the stand booking a charter with his wife.  Why was he booking a charter? His seventh boat had just phased out and at 80+ years thought they would charter moving forward instead of buying another boat into a 5 year program.

That is what has made The Moorings the #1 charter company in the world for 50 Years.  Not the company with most pins in the map, not the company that tries to be all things to all people. It’s the company that has the unwavering support of its charter guests, its “partners” in yacht ownership and all the enthusiasm we see each year at major yacht exhibition when we welcome our “partners” and charters to join us for big thank you parties. I joke with owners and potential owners. Can you imagine if I had not imparted to potential buyers exactly what to expect I would not be still doing this after over 40 years.

As I look back on all my years with The Moorings and all the wonderful experiences created for our partners and our charterers because of a vision that Charlie & Ginny Cary and Tony & Sheryl Rainold had, I am happy to have been a part of it all.

Jean Larroux has been with The Moorings for over 43 years combined. Currently he is the Yacht Ownership Sales Manager.
Jean.Larroux@thlmarine.com