Family Holiday Getaway in the Exumas 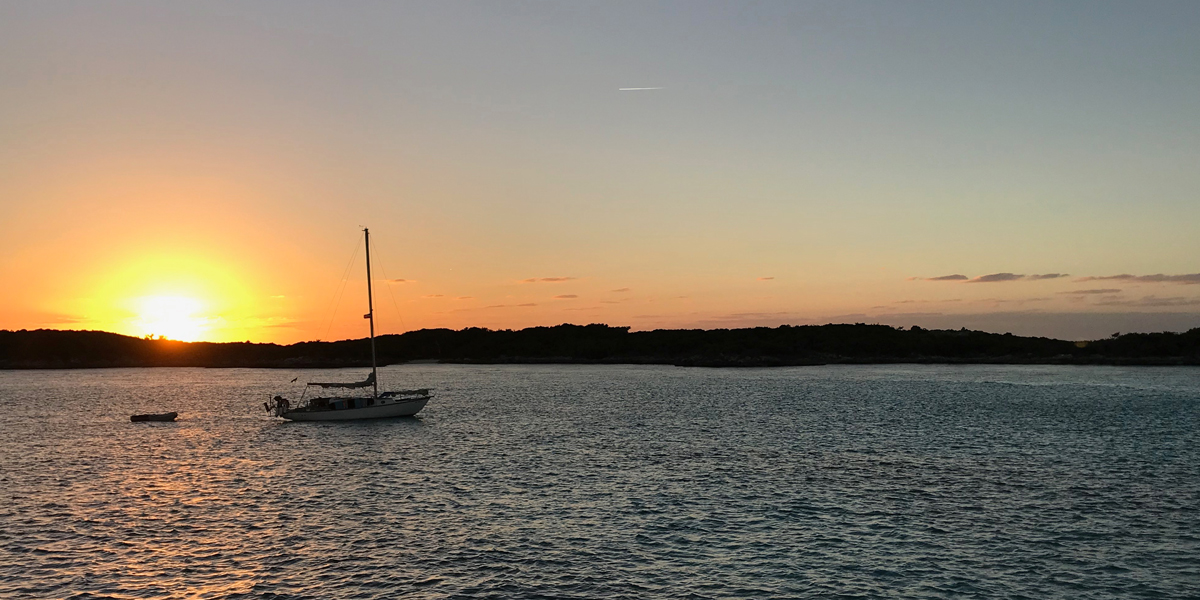 If you are looking to unplug, then look no further than the Bahamas. More specifically, look towards the Exumas. Although just a short flight from the States, you feel a world away from the commotion of South Florida.

Last Christmas, my family and I decided to get away for a few days, and the Exumas were our chosen destination. The yacht of choice was a Moorings 433PC, which we picked up from the Moorings Base in Nassua, which was conveniently located at the spectacular Atlantis Marina.

After a busy travel day, we were happy to arrive to our yacht. Renado, the base manager, gave us a great on board briefing upon our arrival. Once that was completed, we hopped in a taxi to go provision for the week.

The local grocery store, called “Fresh Market” is close to the marina and had everything that we needed, even though quite expensive compared the US. The exchange rate between the Bahamas Dollar and the US Dollar is 1 to 1.

Once unpacked and provisioned we opted to take a walk around the Marina where there were plenty of restaurants and stores. We walked to Atlantis and observed the giant tank in front of the hotel, and while this was very interesting, the resort feel of Atlantis had us eager to head back to our boat and look forward to what the new day would bring-- cruising to the Exumas. 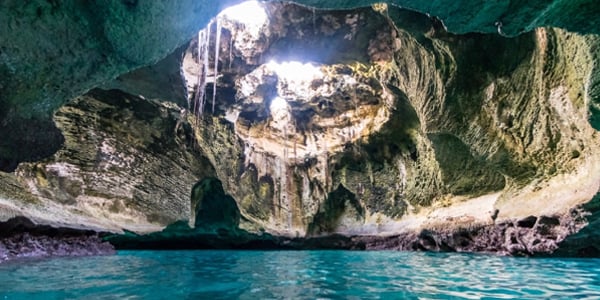 After a quick lunch on-board, we swam to a small beach just south of an abandoned concrete house, on Leaf Cay, to find several unafraid iguanas that came right to us, clearly looking for food. We had brought few crackers that were devoured by small and big iguanas. The larger ones, probably older, could barely see the food and seemed to confuse our toes for snacks, so a few times we had to make them run back to the bushes. We walked on top of the island to be the other side to get a fantastic look at reefs and sand bars in the Exumas sound. We walked down to a beautiful small beach, took some photos and still managed to find various plastic trash that we brought back to the boat....

The evening was uneventful with dinner on-board until around 9 pm when the tide changed causing the boat to move 180’ around the anchor to stabilize in about 4 ft of water not too far from the sand bar. As I was monitoring the depth, I started to feel uncomfortable with the depth dropping fast with the tide, and the sand bar being dangerously close. So, around 11 pm we decided to relocate the boat at the entrance of the anchorage, luckily in a bright full moon (explaining the force of the tidal current) in 8 ft of water, and an even stronger current. The first lesson of the Exumas was the strength of the tidal current washing through the islands between the deep Exumas Sound and the Exumas Bank.... better to drop extra chain and make sure the boat can swing 180 every 6 hours. 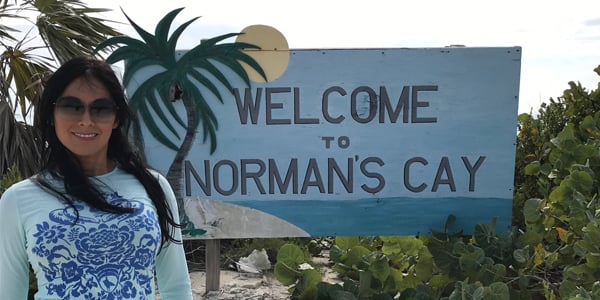 Our plan was to head from Allen's Cay to Highborne Cay, but after breakfast on board, we decided to head directly to Norman Cay by leaving the large Norman's bar to port and Taffia Point to port to anchor between the pier on the southeast side of Norman's Cay and Boot Cay. The anchorage was safe in 5-8 ft of water, even though the same type of strong current was reaping through the shallow area. We decided anchor closer to the pier to avoid full force of the current. We dropped all of the chain and planned to allow plenty of space for the boat to swing 180'.

At midday, we took the dinghy around to a new marina under construction at the south end of the island. We walked to the airstrip to see a prop plane landing and park on the side. It was a short walk to the beach on the west side of Norman Cay with white sand, an incredible view of the banks and crystal clear water... perfection.

It was a 15 minute walk to McDuff where we discovered a few cute bungalows and had lunch at a restaurant with a very relaxed setting.. conch of course! The personnel was insanely nice and they must have spotted us before we arrived, as they were waiting at the door with cold cocktails for us. Cheers!

At low tide, we took the dinghy to the wreck of drug traffickers prop plane that crashed during the cocaine days of Norman's Cay. Because of the low tide, the damaged top of the plane body and tail were visible. We tied our dinghy to the right wing of the plane since we could not find the dinghy anchor! It was a lot of fun to snorkel around the props and cockpit. 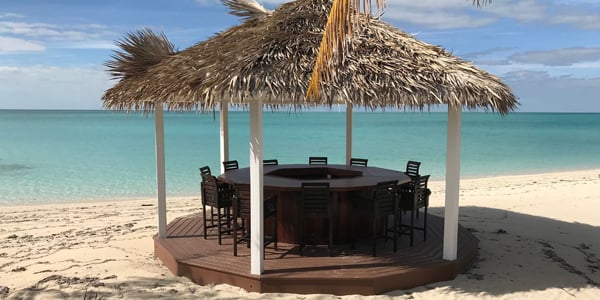 We were last to leave Norman's in the morning and headed Southwest to clear the large shoals west of Wax Cay. After a couple hours of cruising clear of large sand bars leeward of the Cays, we finally made a right turn into a narrow entrance to a spectacular mix of deep and shallow waters. A horse shoe shaped deep channel wrapped around the sand bars creating several range of blues from 0-15ft of water in the middle of channel. This area felt like a remote paradise. As soon as we secured the Moorings ball, a nurse shark was curious about our boat and started to swim around the stern. This experience made for great photos!

We took the dinghy to the Park Wooden House and paid the $30 fee for the buoy and park. This was a high point so we could get a connection in order to WhatsApp family on Christmas Eve. By coincidence, we ran into an ex-Leopard sales agent, Jeff Jones, from the early days of Leopard Catamarans! Daisy cooked a great late lunch and we went swimming in the pools of blue waters between the sand banks. 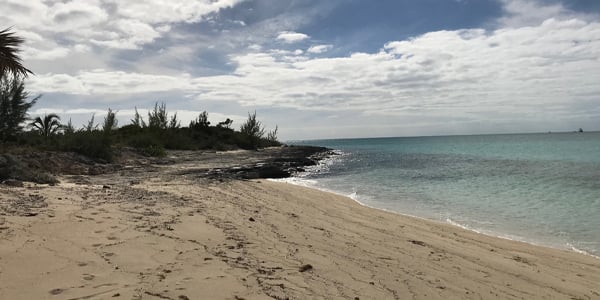 At 2pm, we went to a Christmas dinner that was organized by the lady from the office in her house. Everybody brought something and it was very comforting to have home cooked food from people of all parts of the world. We brought some cheese, bread and red wine. We got to chat with Capt. Brent, the park warden, about the BVI's and aftermath of Irma, a park plan regarding Moorings balls for cruisers and the wind and currents. We also had a conversation with a nice couple - John from the US and his wife from Argentina, about the recent forecast. They informed us about unfavorable conditions for the next days. We soon returned to the boat, made a nice dinner and headed to bed early. It was a windy, pitch black night - not ideal.

We got up early and ate a quick breakfast to leave the anchorage early and head to Staniel Cay. in retrospect, we should have left to Staniel the day before instead of staying moored in Warderwick Wells all day. The wind was from the east around 25 knts.

My family and I were back to our homes safe and sound later that night. We enjoyed the beautiful sights the Exumas had to offer, but now it was time to head back to reality! Fuel was around $4.67 per gallon and we had burned 76.5 gallons on the way to Staniel. The total cost was $357. From Staniel to base we used 73 gallon and spent $305 total, provided we made it in 4.5 hours (85 miles at an average 18+ knots with easterlies at 20-25 pushing the boat from the starboard stern). We totaled 150 gallons of fuels for the whole week, not bad! 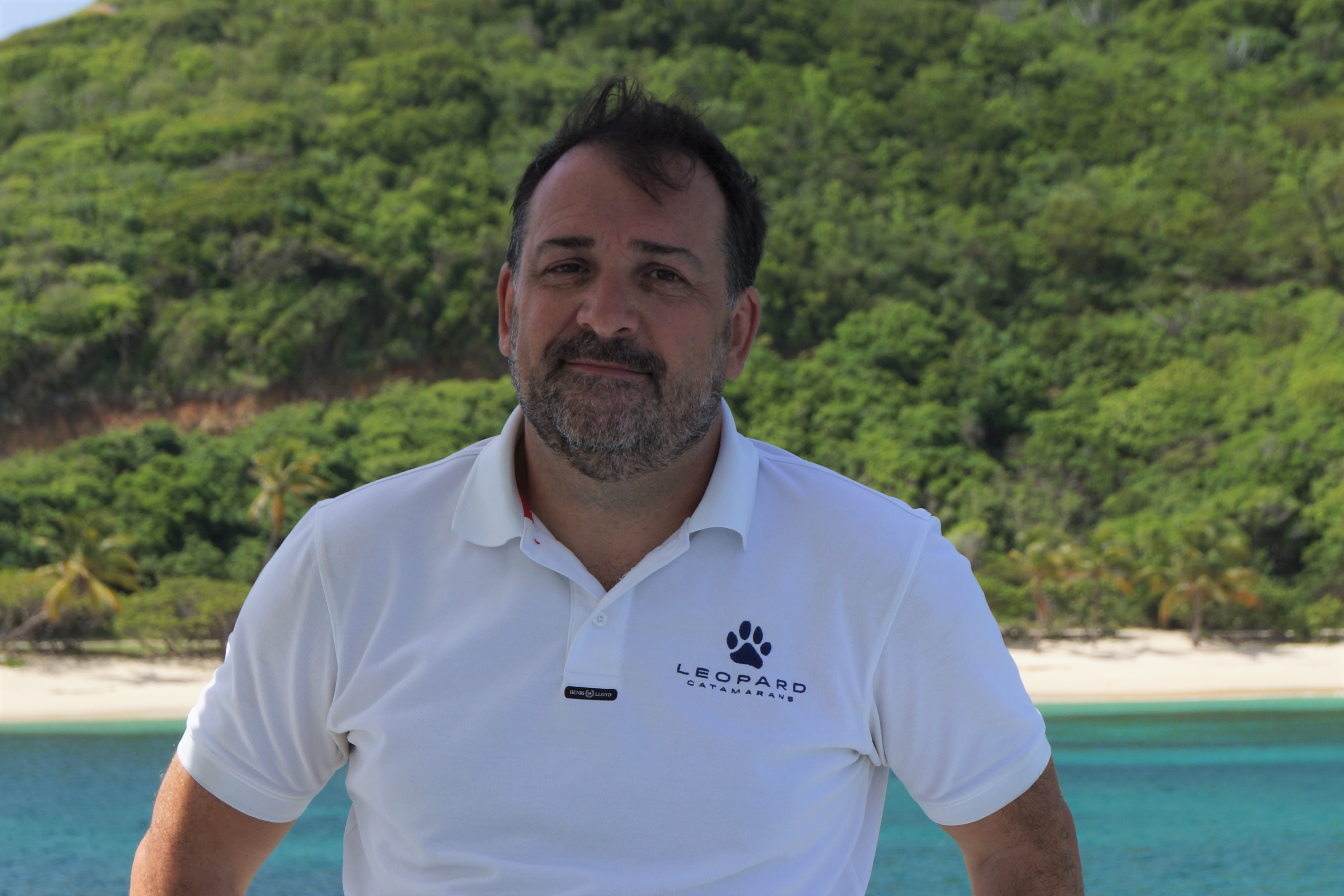 Franck is VP of Yacht Ownership & Product Development at Travelopia (Moorings/Sunsail/Leopard). Franck is a long time sailor and powerboater. Franck started working with catamarans in 1992 and joined The Moorings in 1996. Franco-American and multilingual, Franck likes everything about the marine industry globally, and is passionate about the Travelopia Yacht Brands.
Franck.Bauguil@thlmarine.com