Highlights of Cruising in Low Season

‘Tis the season for our friends in the Caribbean to have their busiest time of year, and for the yacht sales team in the United States to have a bit of a break from boat shows.  We are happy to answer questions about our Yacht Ownership Program year round, but boat show season gives us the opportunity to speak to people in person and finally put faces to the names of our clients considering their options.  One of my favorite parts of shows is when owners in our Yacht Ownership Program come by to say hi, and inevitably end up chatting with prospective owners and giving them their personal highlights and experiences in the program.  My colleagues and I can answer the detailed questions about owner use, agreements and all the fine print, but speaking with actual owners who can validate the things we explain about the program is the perfect endorsement…and owners usually end up bragging about how much fun they are having cruising at our locations worldwide!

Another common occurrence at boat shows is that we can see people react to hearing “High Season and Low Season”, and unfortunately seem to perceive Low Season as “off season”, or undesirable times to be on the water.  Low Season in the Caribbean is April 16 – December 15, and I have been lucky to have been in the BVI in the end of April, beginning of May, June, July, August, November and December.  I know owners who love to go in September and October, and while many of the restaurants are closed during that time, they still have a wonderful time.  The crowds are smaller, which is great at the Baths and Indians, but there are still enough people to get a good dance party going at any of the usual spots.  I have spoken to owners who have visited our Mediterranean locations in Low Season (March 1 – June 15 and September 23 – November 30) and they only ever speak fondly of their travels.

Something else that frequently comes up from prospective owners is “I don’t have 12 weeks of vacation to get enough use out of the program”.  Very few (very lucky!) owners have 12 weeks available in a year to use all of their time in Low Season for 1 point a day.   Of course when an owner goes in High Season it is 2 points per day so then they have less than 12 weeks available, but another great way to get the most out of owner use without going 12 weeks a year is to take more than one boat out at once.  As long as there is an owner on board each boat, owners can create their own mini flotillas, and use the amount of points needed for each boat.  So you can take out multiple boats at the same time for extended family or larger groups to island hop together.

This past August, friends and I met up in the BVI and chartered a Sunsail 454 and a Moorings 514PC, which was a great way to get a lot of people together, and the crew could take turns sailing and navigating the winds, or relaxing on the flybridge of the power cat for the journey from one island to another.  We had paddle boards and inflatable birds galore, so rafting up next to each other gave us lots of opportunity to hop from one catamaran to the other and climb onto our flotation devices with ease.

We had The Moorings provision both boats, and even with a range of vegetarians to meat lovers amongst us, we enjoyed delicious potluck meals on board (comfortably spread out between the aft cockpit and flybridge on the Moorings 514PC) and alternated with some snacks, lunches and dinners at some of our favorite spots around the islands.  We celebrated a big birthday with a reservation for dinner at Foxy’s, so the table for 12 was set for an amazing dinner, and even though the man, the myth, the legend Sir Foxy Callwood was not on island, we still had a great time in the house he and his team have built.

Now that it is December it seems like our amazing August trip was so long ago, but as usual we started talking about the “next trip” on day one of the last trip, so we will be making tropical memories again soon enough!

Coming soon! Don't miss part two of my trip to the BVI blog, where I will share with you my full itinerary and provide progress details of the BVI after Hurricane Irma. 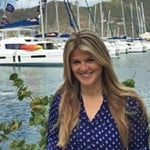 Laura grew up in Miami and spent her early summers at sailing camp on Miami Beach and in the Florida Keys, and has been lucky to find ways to travel and be on boats frequently throughout life. Never forgetting her incredible first sailing trip around the BVI in 2004, she was thrilled to join the Moorings & Sunsail Yacht Ownership team in 2013. She is happy to answer all questions about the program and available yachts in English and Spanish.
Laura.Humbertson@thlmarine.com